I want to take this opportunity to thank all of the Village of Brown Deer who voted on yesterday to elect your neighbors who will service you for the next three years.  I especially want to thank you for supporting me and my leadership for the next three years.  Let’s continue to work together to make the Village of Brown Deer the gem in the North Shore.

Leadership committed to having a consistent presence in Brown Deer by supporting local businesses, welcoming new homeowners and being active in our community through involvement on local boards and committees.

Leading the village through a pandemic by encouraging vaccination, holding virtual meetings when necessary, working with businesses to stay open while keeping employees and customers safe.

Being responsive to all residents through responding to every email, phone call, letter and message.

#BeTheOne has been my campaign slogan since I ran the first time in January of 2018. I am on the ballot for Tuesday, April 5th as the only candidate for the President in the Village of Brown Deer. Many would say you’re good – you don’t have to do anything. I haven’t and I won’t take your vote and your trust in me lightly. Well, if you know me you know that is not in my DNA.

I will be campaigning, it will just be a different way. I will be sharing what has been accomplished in my first 4 years (as Trustee and as Village President) and what I would like to see in my next three years.

I will also use this as an opportunity to educate residents on the operations of the Village and who is responsible for future reference. I will also share information about the candidates who will be running for Trustee and why I believe they should be elected (there are three on the ballot – you elect two).

I am honored to be elected as the next president of the Village of Brown Deer. There are so many people to thank, but most importantly the citizens of the Village. Your confidence in me and my vision will be what helps to guide me over the next three years. I look forward to working with the Village Board, staff and the community as we continue to move Brown Deer forward. I congratulate Carl Krueger on a spirited race, but most of all I thank him for the years of dedicated service to Brown Deer and I trust that he will continue to be involved in the community.

This is long but some have asked my view the upcoming election.  I have a unique perspective because I was the President before Carl F. Krueger.  I know all the candidates and I’m supporting Wanda J. Montgomery.  I’ll tell why and then I’m done – I won’t debate, justify or respond; I’m just sharing my view for what it’s worth.

I first ran for office in 2001 with Jeff Baker and Gary Springman, Carl was on the Plan Commission.  Jeff, Gary and I ran together as outsiders back then.  When I decided not to run Carl to stepped up to President, ran unopposed, and has been serving ever since.  Back when I talked to Carl about running for President I admitted I didn’t always agree with his politics – we were on opposite sides on many issues – but I appreciated how he made decisions.  To me that’s critical – I never vote for a candidate based on one issue, because the issues change over a term in office.  I vote for the person I think will make good decisions.

The Village Board incumbents running this spring have lost my vote for many reasons:

1.  Eminent Domain is a bully’s tool.  In 2013 the incumbents were on the Board when it sued 22 owners in the village (2011CV018995) over eminent domain for sidewalks.  Since then, most of those 22 have left the Village (Janet sold Prime Time, Jim Marks sold River Lane, Tony Reno sold the Deli and Salon, etc.).  Then in 2017 it was Rite Hite, after paying taxes for over 30 years and giving $1M to the YMCA.  Good corporate citizens shouldn’t be targets of our Village Board.

2.  Recent big ticket purchases.  The contract for the new DPW building was $9.1M.  $7.6M for the building, and $1.6M to remodel Village Hall; on top of $1.37M (plus legal fees to fight Rite Hite) for the land.  I can’t believe we needed a $10M facility for a DPW that manages 4 square miles of built-out land and contracts with Veolia for garbage collection.

3.  The Library, of course, that I see as 2 issues:  First, the sudden crisis of “the sinking fund that’s going broke if no one takes immediate action to buy a building and save the Library” did not develop overnight.  If moving to the original village was in the Comprehensive Plan since 2009, why didn’t the Board buy the same building back in 2014 at auction for $800,000?  We paid too much already and it’s going to cost more to remodel.

Second, why is the Village Board making decisions about our Library’s future?  WI Stats. 43 requires an independent Library Board run the library and its budget.  The Village Board is in way too deep on this matter and shame on Jeff Baker, who serves on both Boards, for not pointing out the conflict.  None of what I’ve seen over the last 6 months makes sense and frankly it’s embarrassing.

4.  Communication.  The committee meetings aren’t to train future trustees, they’re to get input from residents before decisions are made and to have a network of informed people sharing Village news back into the community.  Internet messages can’t replace conversation.  Past Boards have engaged enough people for quorums from our 12,000 residents.  Their input was valued and it helped make our best decisions.

5.  Leadership.  The craziness of this election proves that experience isn’t the same as leadership.  Good leadership allows for full debate, where all opinions are heard and considered.  We don’t need a board that’s a “united front” as much as we need them to listen – to each other and to the voters who put them in office.

Bottom line to me: we need more trust, respect and inclusion on all these matters.

18 years ago I was with Krueger, Springman and Baker but not anymore.  Wanda’s knocked on thousands of doors, asking people to come to meetings, to see and learn for themselves rather than say anything negative about the other candidates.  She’s spoken face to face, not through ghost writers or campaign managers, to voters to make her case for Village President.  I’m convinced she’s what we need moving forward in the Village, and I’m voting for Wanda.

My commitment to you is I will work hard to ensure the Village of Brown Deer is recognized for the value and jewel it is, I will be responsive to you, our government will be transparent and inclusive of all residents.

Your Voice is Heard and Areas of Focus are:

As your current Village of Brown Deer Trustee, my committee assignments are Traffic and Public Works and Tourism. I’m excited to share feedback as I visit and connect with neighbors in the community.

“A welcome change to the BD village board. I am so happy to see Mrs Montgomery running for Village President. She has been a welcome treasure to the Brown Deer community.”

Moving forward together those were the words I spoke last year when I won your vote of confidence to become the next Trustee on the Brown Deer Village Board.

Although I’m new to the Village Board I’m not new to service or leadership.  I’ve led four non-profit organizations, I currently serve as President of the Board of Directors for National Black Child Development Institute-Milwaukee Affiliate and the African American Chamber of Commerce of Wisconsin.  I have leadership roles in the broader community such as, Co-Chair of Life Course Initiative for Healthy Families (LIHF) with Tom Barrett, Mayor of the City of Milwaukee and a member of the African American Women’s Roundtable advising Chris Abele, County Executive of Milwaukee County.  And, I am Director of Community Partnerships for Children’s Hospital of Wisconsin.

So, today I announce my candidacy to become the next Village President in the Village of Brown Deer.  I’ve spent this time learning about general operations of the Village and specific needs from you as citizens.  I’ve heard you when I’ve visited with you in your homes, in coffee shops, at restaurants, at your block parties, community potlucks, at the Trustee meetings, during Village activities, as I’m walking throughout the Village, on the Brown Deer Community Forum Facebook page and through direct messages via Facebook, email and phone calls.

I’ve heard you say, we want more businesses, please save our library, be fiscally responsible, I want to be involved, the Trustees need to work with the Brown Deer School Board and how can we improve our image in Brown Deer.

My commitment to you are:

I want to hear from you!  I also ask for your Vote on Tuesday, April 2nd, 2019.  Please join my campaign and let’s move forward together! 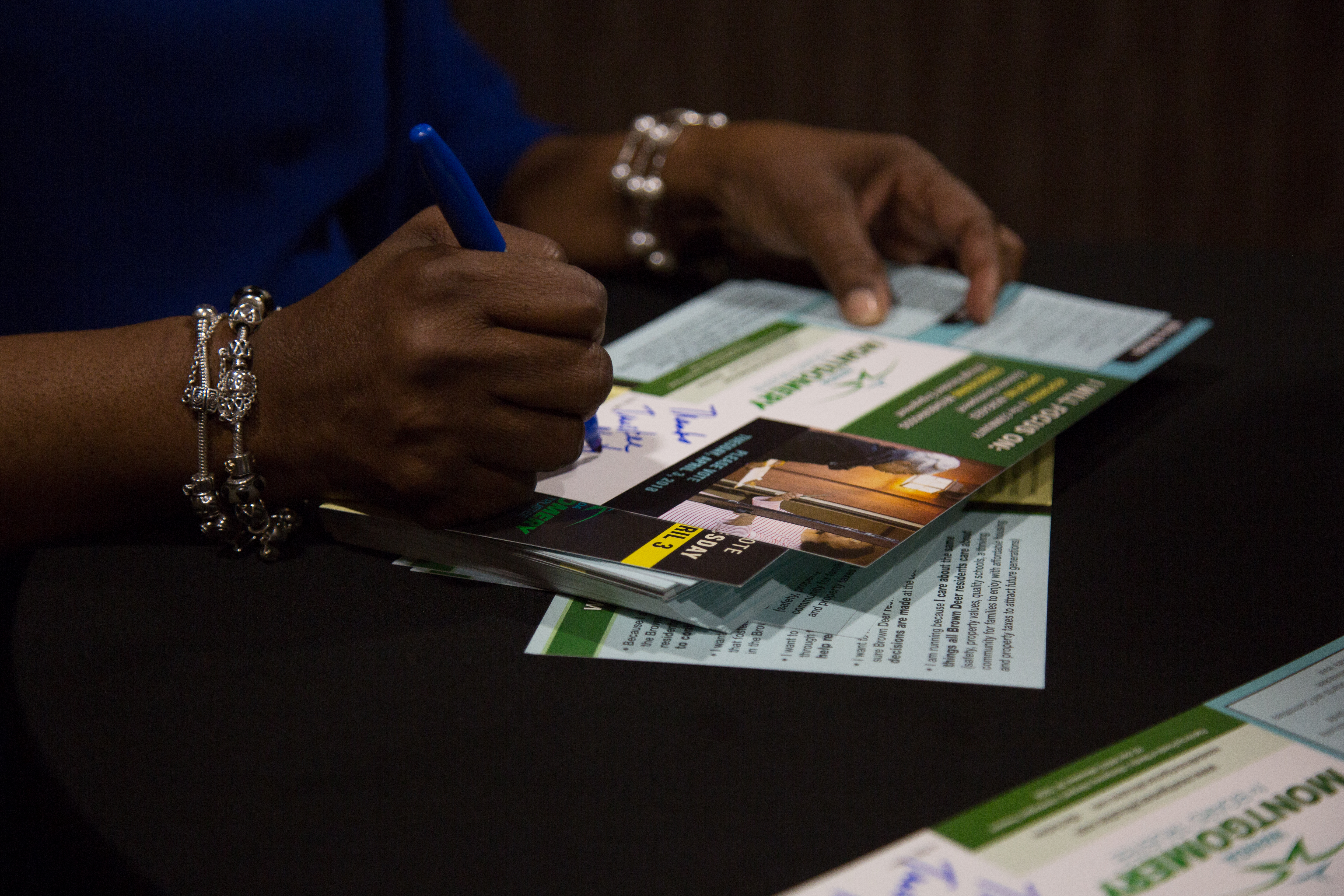 It is with great emotions that I want to thank you for your vote of confidence. I am humbled by your support and by every vote that you cast on my behalf.

I want to also acknowledge all of the many volunteers who stepped up to support my campaign by your prayers, political advice, donations, transportation service, calls, lit drops and just being a listening ear. You were all awesome.

As I move into this new role I will continue to need your support. I invite you to attend Village Board meetings, join a committee or just become more involved in the neighborhood in which you live.

Donate to the Campaign